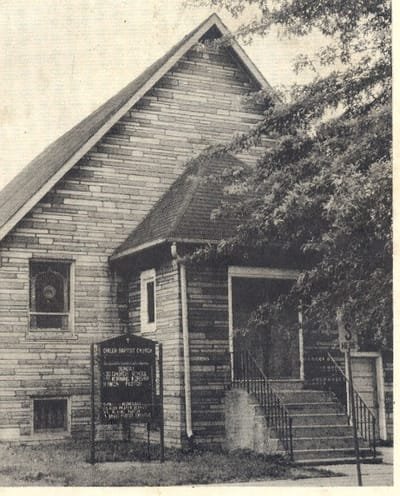 The year was 1917 when the Reverend William Bragg was called to a little mission in Bordentown by its six members: Deacon Errand Greenhill, Deacon David Randolph, Sister Margaret Taylor, Brother and Sister Aaron Keys and Brother William Chatman.  The mission was then located on Second Street and was known as Second Baptist Church.  Reverend Bragg and the members felt that a more relevant name for the church would be Shiloh.  After a substantial growth in membership, the Permanent Council of the Bethany Baptist Association was called and the church was recognized as the Shiloh Baptist Church of Bordentown, New Jersey.

In 1923, after meeting for several years in the old Maron Hall on Second Street, property was acquired on East Burlington Street and one year later the Reverend Bragg led his congregation in a triumphant march into a new sanctuary. For many years the members of Shiloh struggled and worked in the name of the Lord and finally on November 18, 1953, the mortgage was burned. This sanctuary now serves as a historical site in Bordentown.

With over fifty years of dedicated and faithful service to God and mankind, The Reverend Bragg was forced to retire because of failing health. He died at the age of 104.

In January 1967, the Reverend William L. King of Camden, New Jersey accepted the call of the members and was installed as pastor. During his tenure as pastor the lower auditorium was remodeled, new pulpit furniture was purchased and a bus was acquired for the convenience of the Shiloh members.

In February 1974 Reverend George L. Coleman, Jr. was called to be the interim pastor of Shiloh Baptist Church. With the support of his home church congregation he was installed as pastor on October 13, 1974 by his pastor, the Reverend J.D. Harris of Mt. Calvary Baptist Church, Camden, New Jersey.

As Pastor Coleman began leading the congregation spiritually, he realized the then standing structure would not service the growing membership. With God given vision Pastor Coleman began to formulate the plan for a new edifice. The small moderate-income congregation did not easily accept the concept. However, the power of prayer took control. "Call unto me, and I will answer thee, and show thee great and mighty things, which thou knowest not." Jeremiah 33:3

In March 1975, the vote to build a new church was taken and November 13, 1975, the ground was broken. The next six years could be called the years of happy and anticipation, sometimes a little doubt, but mostly the years of saving...always with prayer. The Ways and Means committee was organized, the Building Committee was formed, team captains were selected and the teamwork began. In the midst of all activities, the pastor's leadership ad actual participation provided the necessary encouragement.

The actual building time lasted from January through July 1981. Unfortunately, all of those who began with us did not see the "fruit of their labor." Yet their presence was with us on that great day of August 9, 1981 when the march-in took place. After the cornerstone was laid in November 1981, the pastor kept us focused in responsibility. ("Therefore, my beloved brethren, be ye steadfast, unmovable, always abounding in the work of the Lord, forasmuch as ye know that your labour is not in vain in the Lord." I Corinthians 15:58.) Our work began... to satisfy the mortgage. On Sunday, October 8, 1995 the vision was realized at the Mortgage Burning.

On March 16th, 2008, the sudden death of our beloved Pastor G. L. Coleman, Jr. marked the end of a great era in our church's history. The Reverend Archie G. McBride served as our pastor from September 2010 until October 2016 as the congregation continued to uplift and magnify the name of the Lord.

On May 19, 2019,  Rev. Todd S. McCrary was installed as the fifth pastor of The Shiloh Baptist Church.  The heritage of those few faithful armor bearers who started Shiloh 100 years ago is still being carried on and Shiloh still stands ready to minister to all who will hear.  Thus with the mighty words of our Lord, Jesus Christ, we look forward to the next 100 years.  "Upon this rock I will build my church and the gates of hell shall not prevail against it."  Matthew 16:18